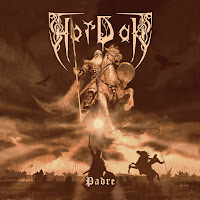 When you think of pagan music, Spain is not a country that springs to mind. Spain is devoid of fjords, vikings, and ancient runes. That being said, HORDAK is giving it that good ol' Odin try. The release of their fourth album has a sound that is pagan light. The music is more jaunty death metal with a few pagan flourishes. The guitar solos are 90s hard rock. The vocals are the cookie monster growly type things. Every once in a while, since they are pushing the "pagan" thing, you get flourishes of Luys Milan and Gaspar Sanz (which is actually late Renaissance / early Baroque). If you are a guitar aficionado, then Hordak will be right up your alley. If you are a strict pagan music listener, not so much.

Taking 'Padre' on its own merits, it's a darn good album. It's pleasing to listen to. The compositions are complex yet accessible. A. Mansilla and Winter on guitars are a great combination.  They are in tune with each other and compliment each other. They are definitely a highlight on the album and will keep you coming back to re-listen. J. Sierra's drumming is strong and sturdy. Each of the songs has its pros and cons but I'll leave it to your own discretion to sort those out. I found a lot more to like on this album than dislike.

Listen to exerts from Hordak's Padre. 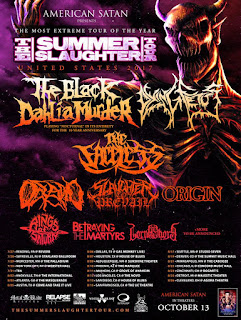 Rapheumets Well Enders Door      Test Your Metal Records Release: 26 May 2017 Full disclosure. I reviewed Rapheumets Well 'The Exile' last year and it was awesomeness!  Rapheumets Well - Exile   So now I bring you the newest offering from Rapheumets Well entitled 'Enders Door'.  The band's fifth album and nothing has diminished. 'Enders Door' is just as heavy and scary as the previous albums. There is a delicious wickedness that oozes from every track.  'Endors Door' is thirteen tracks scintillating in at an hour and two minutes long. I really like how they blend some many musical styles into their atmospheric doom contemporary dance metal opus. That being said. I can have my opinions on the music, but here is what is really happening:  In the fifth era of the Avomenian Empire, amidst the planetary ruins of Vaath, a rogue traveler would discover an artifact that would forever change his place in the cosmos. Upon arriving to retrieve the artifact,
Read more